In 1066 Duke William of Normandy conquered England.  The Domesday book was compiled 20 years later.  The Saxon Chronicle records that in 1085 “at Gloucester … the King had deep speech with his counsellors … sent men all over England to each shire .. To find out … what or how much each landholder held.”

The Domesday Book is now held in the National Archives at Kew.

4.   How many hides are there (what is its tax assessment)?

8.   How much has been added to or taken away from the manor?

10. How much had or has each freeman and each sokeman?

11. And whether more can be had than is had (in other words, can the manor raise more tax revenue)?

For the South Western Counties there is another set of returns - The Liber Exoniensis or Exon Domesday.

It is a composite land and tax register associated with the Domesday Survey of 1086, covering much of South West England.  It contains a variety of administrative materials concerning the counties of Cornwall, Devon, Dorset, Somerset and Wiltshire.

The Liber Exoniensis would list livestock whereas the Domesday Book generally did not.

Firstly, as part of the Taunton Deane Hundred, it appears as land held by the Bishop of Winchester. 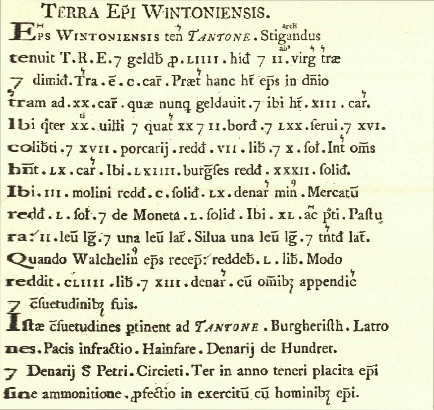 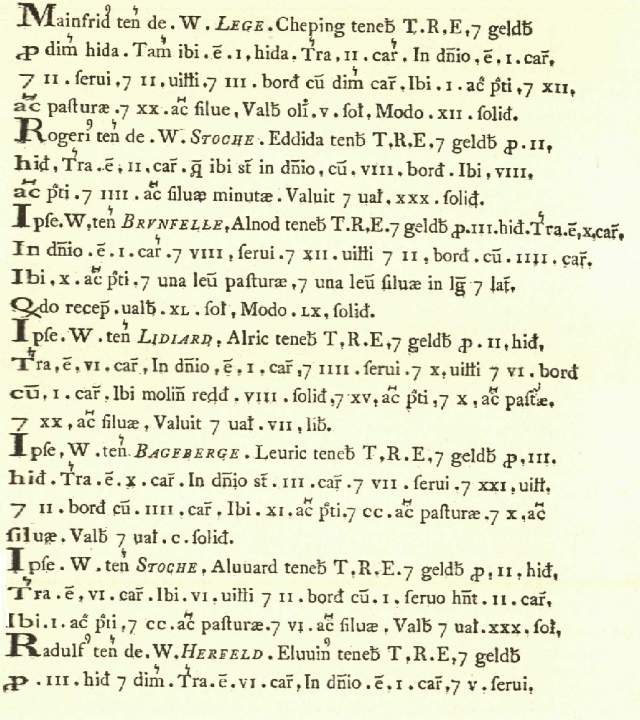 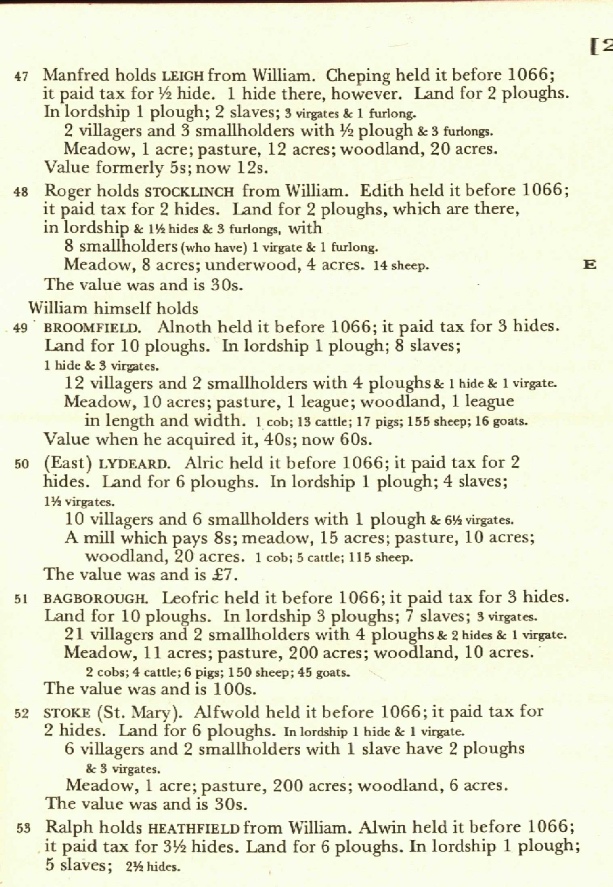 - THE LIBER EXONIENSIS OR EXON DOMESDAY

Entry for Stoke in the Liber Exoniensis [1816 Ellis edition]

The Exon copy does not mention livestock - so either there was none, or not enough to be worth counting.

Only Head of houses were counted so there  were possibly only a maximum of 8 houses in the village with perhaps a small barn or two, possibly somewhere in the area of the ancient field strips near Higher Broughton Farm?

Hide hida Measurement of land for tax assessment used outside Danelaw counties (where carucates were used). Approximately 120 acres, depending on local variations in the acre.

Virgate virgata, virga A quarter of a hide ie 30 acres.  Used in Domesday for tax purposes.

Plough caruca, carruca In Domesday the word implies a plough team with its eight oxen and the plough itself. The measure of a carucate was originally the amount of land which such a team could plough in one day.

Villager villanus Member of the peasant class with most land.

Smallholder bordariums Middle class of peasant, usually with more land than a cottager but less than a villager.

Pasture was land where animals grazed all year round. Meadow which was much more valuable, was land bordering streams and rivers, which was used both to produce hay and for grazing. Pasture was entered in Domesday less regularly than meadow and was measured in several different ways.

The arable land was used to grow wheat, barley, oats and beans.

The system of landholding as portrayed throughout the Domesday Book was based on a rigid social hierarchy called the feudal system,

Rather than being owned, as is the case nowadays, land was held from a member of society higher up the social tree. At the top sat King William who granted land to tenants-in-chief - usually lords or members of the Church, in return for their assistance in the Norman Conquest. Next down the ladder came under-tenants who held land from the tenants-in-chief, and so it continued with the bottom of the ladder being occupied by peasants - villagers, bordars and cottars - who earned their opportunity to hold a small amount of land by working on the land of the lordship, and slaves, who held no land.

“We know that the lords of Dunster some time after 1086 relinquished some of their manors. ‘Exford, Alcombe, and parts of Brewham and Lydeard ceased to have any feudal connection with Dunster when given outright to religious houses to hold in free alms. Also we may eliminate Stoke St Mary, Nunney. Spettisbury, Poleham. Winterborne and Clayhanger, belonging to William de Moyon in 1086, but soon after surrendered or exchanged “